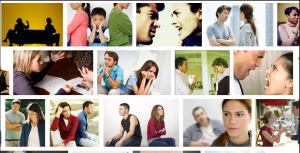 What Do You Do… when your dance partner is your significant other, and you both screw up your routine on stage?
by Edie, The Salsa FREAK

The first natural impulse is to blurt out the word â€œYOUâ€¦â€ before all the other words that come vomiting out of your mouth. â€œWhat happened???â€ is another good one that always starts the fire ablaze. â€œWHAT WERE Y0U THINKING???â€ is priceless. That will leave the both of you sleeping on the seam of the mattress for a couple nights. â€œWhat the $#@&â€¦ went wrongâ€¦â€œ among all the other profanities human kind has made up over the centuries is a sure-fired way to divorce courtâ€¦

Yup, Iâ€™ve just about seen it, and been through it all. Surviving and withstanding a partnership with your significant other is one of the toughest things you can put your relationship through. When two people in love, get together and decide to dance, perform, and compete together, you can bet there are more than just the challenges of the dance, but the psychological challenges that almost always come with it.

What Iâ€™ve found that works best when a routine has gone awry onstage, is that you just donâ€™t say anything to each other afterward. Blow out the flame on that candle, before it turns into a blaze of anger and blame. You both know you both feel bad. You both know exactly what you want to say to the other, but trust me; an ounce of restraint is worth a pound of anger. When you start blaming the other, not only do you feel bad, but you look bad as well, to your partner, and everyone standing around you within earshot.

Trust me. Your partner feels just as bad, if not worse than you do, so LAY OFF each other for a while. Let yourselves cool off. Go to a different room and relax. Talk it out with anyone ELSE and let it out without blame. Place the blame upon yourself and take it in stride. Remind yourself that you are not perfect, you are not God, and that human beings make mistakes. Everyone makes mistakes. You were probably getting cocky and you just needed to be humbled back down to reality again. Remind yourself that things happen, and whatever doesnâ€™t kill you, will only make you both stronger.

If you both know that during rehearsal, you completed the routine flawlessly numerous times, and you did the routine AT LEAST 100 times prior to performing and only after the choreography was complete, the mistake you made onstage was just a fluke. Thatâ€™s all. You both know that you could have done better, but you only had one shot â€“ and missed.

Smile at each other, pat each other on the back, give each other a hug, apologize to each other and encourage each other that youâ€™ll nail it the next time. Wish each other better luck next time, with more time at rehearsal. Keep in mind that it is the quantity of times you rehearse, not the quality of rehearsal time. Get back to the studio, and rehearse some more. Stop blaming each other. Remember, when you point the finger at your partner, there are ALWAYS three fingers pointing back at you.

Itâ€™s much easier partnering with someone you are not involved with. The line that hasnâ€™t been crossed maintains the mutual respect that is, more often than not, completely lost once a dating relationship has begun.