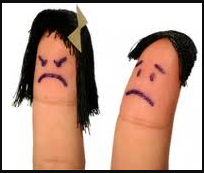 “Dear Edie,
I’m so glad I surfed and surfed the web until I finally found the Dancer Hangout! I never knew there was so much information for Salsa freaks like me, by Salsa freaks like you. I was reading your “Off Beat” letters of concern regarding people who have no rhythm. My story is similar and would like some advice.

About 2 years ago I began learning salsa. My boyfriend knew a little more than I did, so we went to a Grupo Niche dance (I’d never heard of the group at the time) in [my city] and basic-stepped our way through the night. It didn’t take me long to get the latest moves down behind my boyfriend’s back; I would practice with my older brother every time we had the chance. I was a fast learner, by brother said, because I was a good follower.

Soon after I began clubbing and got more practice in (still all behind my man’s back). This past summer was a disaster. We decided to go to this Salsa club together for the first time. I danced a Salsa, Merengue, and Cumbia with him, and then I became very frustrated with his not knowing how to turn me, also he was off beat. I became bit-chy and refused to dance the rest of the night. There were times when I tried to lead him but he wouldn’t conform. I absolutely dreaded going clubbing with him, the night would always end miserably: I, unsatisfied and bored, he, embarrassed and jealous. One night at a club other men started asking me to dance because they probably thought me and my boyfriend were just friends (we were just sitting there watching everyone on the dance floor). Without thinking, I offered my hand to one man, then pulled it back, looking at my boyfriend for approval. I saw the look on his face and then told the man no thank you. That was the final straw. We got into a big fight that night. We came to a compromise that I could go clubbing with my female friends, and that he and I would stay away from clubs all together.

The point is I want to dance with him; he’s practically my fiance and I think it would be so wonderful if he knew how to move me. He once suggested that I teach him but that’s impossible. I have no patience whatsoever, and plus, it’s extremely difficult for the women to teach the men PATTERNS and COMBINATIONS! What do you suggest? That he take private lessons? I can’t take them with him because presently we’re apart from each other (I’m at school away from home). I don’t want to keep going out without him, I want him
to learn. Please help.

P.S. Thank you for the tips on how to get away from a no-rhythm dancer. I figured out that maybe I have been a bit-ch to many men and should be more flexible to different men’s dancing styles--no matter how OFF BEAT!
– Impatient”

Dear Impatient,
If you really want this man, AND your dancing, this is what you will have to do, to have your cake and eat it too:

This will sound rather HARSH, but it’s the only way it will work between you two. Have him take PRIVATE lessons 2-3 hours per week from a VERY GOOD male dancer for the next 2 months. Meanwhile, you stay away from the club scene, and have him show you what he learned on occasion. NEVER CORRECT HIM, NEVER CORRECT HIM, NEVER CORRECT HIM – only if he asks you to – you may teach him slightly wrong or different from his instructor, and you don’t want to catch hell for it later on. During this two month period, and for three months after, he must go clubbing without you, as often as possible – at LEAST 3-4 nights per week. He’s GOT to get good at dancing with everyone else BUT YOU for the next 5 months. NEVER CORRECT HIM on the dance floor. His ego is at stake here. Start correcting him via his instructors or friends – without telling him you did it. He will treat you like a queen if you dance with him and never complain – just enjoy the ride, have fun, laugh, and be happy that he’s EVEN THERE with you. Don’t take anything for granted. Nothing. Appreciate his efforts to at least try.

This may also be a test of your patience. Obviously, you’ve been made aware of just how “bit-chy” you can be. Admitting it, is 50% of improving upon it. You now know more about yourself based on the statement: “….I became bit-chy and refused to dance the rest of the night. There were times when I tried to lead him but he wouldn’t conform. I absolutely dreaded going clubbing with him, the night would always end miserably: I, unsatisfied and bored, he, embarrassed and jealous. ” When taken out of context, it is more evident where YOU need to improve… your head.

Both of you have GOT to keep one thing in mind. 99.9% of the time, your life partner WILL NOT be your favorite dance partner. He/she will be just average and in your mind, “never good enough”. Why? You will expect more from them on the dance floor then they can possibly give – only because the both of give each other more outside of the relationship in everything else in life – hence the reason why you love each other so much.

We automatically “assume” our partners can do the same for us or give us the same feelings when dancing together. This is simply not the case.

Realize, and be convinced NOW of this fact:
He will not think of you as his favorite dance partner either. Like you, there will always be another woman or women he prefers dancing with. Keep in mind, he will prefer just “dancing” with her – that’s it. She may be his favorite dance partner, but he would NEVER want to actually sleep with her or develop a relationship with her like he has with you. He may think about it (he’s a man… come on!!!) but 99.9% of the time, it won’t happen. Like you, I’m sure you have danced with other men that lead you like butter, swept you off your feet, put you through some spins and turns on the dance floor that made you want to have a cigarette after the song… but would you REALLY consider sleeping with them? Or even marrying them? Be brutally honest with yourself. He will go through the same thoughts. It’s a fact of life. We’re all human. Fantasizing vs doing are two entirely different things. You’ve got to develop trust in a relationship – the test of that trust is on the dance floor.

The men that you love dancing with have had years and years of experience. It will take THAT LONG for your life partner to be THAT GOOD – and additionally, ONLY if he really wants it as bad as they did. You need to remember that there is more to him that you are attracted to than dance. It will be hard to keep this in mind, especially when the Salsa fever takes over and it’s all you can think about. If you can accept this in your mind, you will have a phenomenal relationship together, and a long lasting one.

To me, couples who lasted the longest together throughout their lives have these three things in common:
“TRUST, HONOR and RESPECT”More importantly, they “ACCEPT each other” for who they are,
and love each other “ANYWAY”.

Let us know how everything goes by placing your comments below!!