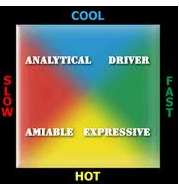 By Edie, The Salsa FREAK!! When I teach, and/or deal with the public in any way, I think of the Four Standard Personality Types.
I found that the four books written about Christ’s life in the New Testament were written by four entirely different people with completely different personality types.I’ve based the entire Black Belt Dance (BBS) Instructor and Student Training curriculum around those four personality types.
(SIDE NOTE: In fact, I am a HUGE FAN of Star Trek (the original television series) and created the Dance Business Management (DBM) like Star Fleet Command, and the BBS as the USS Enterprise.
The Mothership is the Black Belt Dance (BBD), that hosts ALL the partner dances – not just Salsa.) oh… and yes, I am a HUGE believer in extra-terrestrial life (I could care less about UFO’s – Frankly, I am more interested in THEM and HOW THEY THINK rather than their “vehicles” ). I’ve experienced them. There is a connection – an enormous connection between us and them, and Spirituality to say the least. We can’t POSSIBLY be the only living beings God created in the Expanse of the Universe He created – how can we limit Him in any way? Before I go on a rant… let me stop with this thought: There is ssssoooo much evidence about life off-planet earth (I’ll speak of it later) in both the Old and New Testaments – it is incredible.)

Why? Because that is how we GET ALONG with others – mirroring THEM like we do when we follow our dance partners!

Things just seem to “Work Out Better” when others can “relate” to us – whether we are dancing together or at the bar talking about the Word of God together. .
The same Personality Types were four of the most important authors of Christ’s life are in the Bible.

Jesus was/is a portrait of God the Father to make us understand the character of the Creator of the Universe from a human perspective.

This portrait is described in three dimensional terms by four separate authors in the first four books of the New Testament.

WHY: Because some of just can’t relate to others outside of our own personality types. So God has shown us the story of Jesus in every possible way so we can have that AH HA moment sooner without going crazy, getting bored, or just confused.

OK. Check this out.
The four authors about Christ’s Life in the New Testament were/are:

He is portrayed in a three-dimensional aspect by three of his apostles Mathew, Mark, and John, and then Luke, who was a doctor, and avid writer of the history of Jesus, and a friend of the Apostles.

A Director – Cholericthe bottom-liner, who wants you to jump to the chase and will decide instantly

A Socializer – Sanguine the expressive, who loves the new stuff and is easily bored

An Analytical – Melancholythe analytical, who craves facts and more facts and has trouble deciding

A Relator – Phlegmatic the amiable, who values relationships above all and wants you to be a friend

If you look at the first three verses in the first Chapter of each book, you can pretty much guess what type of personalities they were.

It should be noted that the four personality types are contrived out of human’s ideas to try and explain people’s behavior.
These types are a non-biblical perspective on human behavior. The four temperaments do not originate from Scripture.

ABOUT MARY….
Christ became an embryo in Mary’s womb. He didn’t just pop out say, “Hey mom, I’m God come to save the world! ” as he skipped out of his manger…(NOT)

He depended on His mother “Mary” to nurture him, change his diapers, and learn how to walk and talk just like the rest of us.
God, our Creator, Creator of the Heavens, stars, earth, everything, became “flesh” because He loved us enough to sacrifice Himself for us.

The Word became “flesh”. In the beginning, was the Word, and the Word was God.
Jesus was God incarnate, in the flesh. When He ascended into heaven, he left us with the Councilor, the Holy Spirit.
The Spirit works like the wind… you can’t see it, but you can see its affects on the leaves of the trees.

I describe the Trinity (God, Jesus, and the Holy Spirit), to be like that of the three stages of water. H2O. (The water molecule itself is a trinity – much how I describe feminine energy in my Salsa Styling Classes)

Ice – God – the stable, unwavering, solid rock
Water – Jesus, the purifier, the well of life, washer of sins
Steam – The Holy Spirit, the unseen, yet felt, silent feeling, the chill or warmth of the Father.

John 6:41 – The Jews then murmured at him, because he said, I am the bread which came down from heaven.

John 6:51 – I am the living bread which came down from heaven; if any one eats of this bread, he will live for ever; and the bread which I shall give for the life of the world is my flesh.”

John 8:12 – Again Jesus spoke to them, saying, “I am the light of the world; he who follows me will not walk in darkness, but will have the light of life.”

John 8:28 – So Jesus said, When you have lifted up the Son of man, then you will know that I am he, and that I do nothing on my own authority but speak thus as the Father taught me.

John 10:36 – do you say of him whom the Father consecrated and sent into the world, ‘You are blaspheming,’ because I said, ‘I am the Son of God’?

John 10:38 – but if I do them, even though you do not believe me, believe the works, that you may know and understand that the Father is in me and I am in the Father.

John 11:25 – Jesus said to her, I am the resurrection and the life; he who believes in me, though he die, yet shall he live,

John 13:18 – I am not speaking of you all; I know whom I have chosen; it is that the scripture may be fulfilled, ‘He who ate my bread has lifted his heel against me.’

John 13:19 – I tell you this now, before it takes place, that when it does take place you may believe that I am He.

John 13:36 – Simon Peter said to him, “Lord, where are you going?” Jesus answered, Where I am going you cannot follow me now; but you shall follow afterward.

John 14:3 – And when I go and prepare a place for you, I will come again and will take you to myself, that where I am you may be also.

John 14:10 – Do you not believe that I am in the Father and the Father in me? The words that I say to you I do not speak on my own authority; but the Father who dwells in me does his works.

John 14:11 – Believe me that I am in the Father and the Father in me; or else believe me for the sake of the works themselves.

John 15:5 – I am the vine, you are the branches. He who abides in me, and I in Him, He it is that bears much fruit, for apart from me you can do nothing.

John 16:28 – I came from the Father and have come into the world; again, I am leaving the world and going to the Father.

John 16:32 – The hour is coming, indeed it has come, when you will be scattered, every man to his home, and will leave me alone; yet I am not alone, for the Father is with me.

John 17:11 – And now I am no more in the world, but they are in the world, and I am coming to Thee. Holy Father, keep them in thy name, which Thou hast given me, that they may be one, even as we are one.

John 17:13 – But now I am coming to thee; and these things I speak in the world, that they may have my joy fulfilled in themselves.

John 18:37 – Pilate said to him, “So you are a king?” Jesus answered, You say that I am a king. For this I was born, and for this I have come into the world, to bear witness to the truth. Every one who is of the truth hears my voice.