Off Beat in Paris 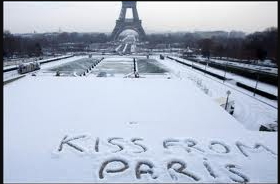 Dear Edie,
I recently went to [city] with my boyfriend. We live in Paris where his dancing gets much praise. He is a competent dancer but he lacks creativity and he thinks his way is the only way.

He became very threatened by seeing the [city] dancers including one very fine [dance instructor ] (male) whom we had met previously in Paris The dance instructor is really nice (was not at all flirty or inappropriate with me). My boyfriend’s vibrations were so negative and he was leading me so hard and criticizing me the whole time that I had a horrible time and it was my birthday to top it all off!!

The dance instructor was so turned off that he left without saying goodbye to either my boyfriend or to me. I do not blame the dance instructor as he had been really nice to us and my boyfriend returned the favor by flirting like mad with the guy’s girlfriend. I had made a special trip to spend my birthday in [city] city where I was born. He was so threatened that he proceeded to openly flirt with the dance instructor’s girlfriend while ignoring me. Ever since I have lost confidence in him and have also lost respect for him as I had no idea that he was such an insecure guy. Please give me your comments.

Dear Off-Beat in Paris,
It’s very obvious that your boyfriend has an insecurity issue he needs to deal with. This will come over time, as he gets more confident in the dance, as well as with himself.

Keep in mind, that there is nothing more fragile and immensely delicate than the male ego. To get that uptight, he may have seen your face and the way you were acting in front of that instructor… he could have taken it wrong. This has happened to me as well. When you’re in the presence of superiority (an instructor who blows your significant other away – in more ways than one), don’t make your comments, excitement, nor exceeded attention obvious to your significant other, especially if your significant other has a delicate ego.

Right now, the only thing he seems confident in is “you” as his faithful girlfriend. Maybe he saw your eyes light up when you saw that instructor to a move.. or maybe the instructor could execute the move WITH YOU far better than with him. This single split second in time DESTROYED his “belief” that he was “everything” to you. When a man feels like he is #2 in your life, things fall apart very quickly. This was the reason for his lack of respect of YOU when he was openly flirting with your instructor’s girlfriend.

If you want to keep him, and he’s worth it, make him #1 in EVERY REGARD your life – always. Remember that. If he is not #1 in a certain area of your life – don’t talk about it, mention it, nor bring it up. Ever.

If any man or woman flirts in front of the person they love, it is a sign of disrespect, and dishonesty.

I would feel very uneasy of your future together.

If you can’t work things out like two mature adults, I say, break off your relationship with him IMMEDIATELY, or at least until he gets his act together, and you see he’s matured a bit. No sense you getting hurt emotionally, or physically. Been there, done that. Not good.

Remember however, it’s a very rare thing to find a changed man. 99.99% of the time, they just stay the same.

“A Man convinced against his will, is of the same opinion still.”

If I were you, I wouldn’t date in the Salsa scene, ever. It’s far too dangerous, hurts way too much, affects too many people, and is simply not worth it. Keep the Salsa scene your playground of fun and laughter. Keep it pure, and honest.

If you still insist on dating your dance partners, then keep the relationship to yourselves, and don’t tell anyone. When you break up, no one will know but you both.