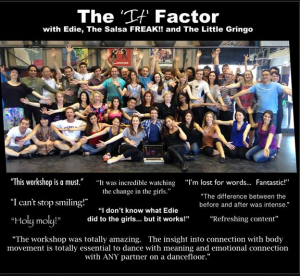 Ohhhh Edie! I so want to kiss you and hug you right now if possible! lol

I went to dance party on Friday and James was there.
He realised that the international instructor was looking at me couple of times and yes this international instructor is known to be super snobby but he was so friendly to me from the start of the baile and when he finished the song he thanked me three times and hugged me tight! Also because I was feeling the power from the IT factor, my dance was controlled, calm, and confident and I connected with him so well that made our dance so beautiful. Not only him but the other performer as well.

The whole time I felt so sensual and powerful. When I want to dance with someone, I just needed to look at them and I got the dance.

I have to say this is close to miracle because I usually had 50/50 chance of getting the dance with someone I wanted to dance.

I had to prove with someone else first that I am danceable in front of the one I want to dance.

I don’t need to have that desperation anymore. Suddenly, the dance party has become so relaxing and fun. I don’t need to go back home thinking that I was rejected.
This is the second baile I went with this IT factor so it might be just coincidence. But I couldn’t keep it quiet about the effect!

But this is not only on the dance floor. It is happening outside the dance floor too. When I work the IT factor, somehow I can feel this attention rate rising up. I felt like Marilyn Monroe lol

About the price of the workshop… I am not sure… The worth can only be justified after knowing the factor…. If I was in the consumer side, I would pay money if I can really imagine the worth of the workshop. It will be easier if there were two workshops and have a peep on the first one and pay for the second workshop to gain the IT factor. OR maybe do it like those websites that sell dating/relationship ebook where they give out 50% of the secrets on the webpage and give the link to proceed to access the grand secret. In that case, I think the workshop can be worth more than 30 bucks.

But I wonder how long would normal girls take to get this IT factor working? I think I had it working fairly quickly because I had some idea about it before (I was wording as “intention” before). During your workshop, did you see remarkable changes before and after on that day?

Thank you so much. I wish I had known this IT factor when I was younger lol

This was sent to me from a female student who wished to remain anonymous.
– Edie

“I took Edie’s woman’s styling class last year and learned about the “it” factor.

I guess I always had “it, I just didn’t know what “it’ was the whole time. But now that I know what “it” is, I am using it to my advantage every time I get.

I am telling you, after the class I was laying on my couch; it was a hot summer evening. I had on yoga pants and a bra and I started thinking about “it”. Not but 5 minutes later my boyfriend called me and happened to be passing by my place. I live out of the way so this was not just coincidence. I talked to him and told him to stop by. A knock was heard and I answered the door. He came in and could not stop staring at me. His eyes were as big as a kid in a candy store. He took me in his arms and we kissed passionately. We kissed more and kissed with passion. Our hands were all over each other. We made passionate love on the couch, then the floor for over an hour! It was amazing and we have this connection like no other! 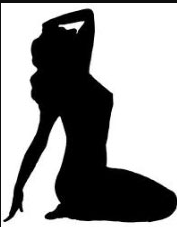 Another time I used “it” was just last weekend. My boyfriend invited me to go shopping. When I was in my bed that morning I thought about “it” and a scenario that I always wanted to try. I am on the adventurous side so, I kept thinking about “it”. He picked me up and we went to the local mall. I went my way in the store and he went his way. I was looking for a particular dress that I had seen in an ad. I found it, tried it on then came out and showed him. His eyes, big again like he just laid eyes on me for the first time. He led me back into the fitting room. Then “it” happened. Without giving too many details, right there in a very crowded fitting room, with people asking for sizes, fitting rooms and chaos; we kissed passionately. Our hands were all over each other like we just met. And we went all the way -.right there -in the fitting room! Needless to say, I bought that dress!

And I know for sure that “it” works! I have many, many other stores of how “it” worked for me.

Ladies if you want to spice up your love life and become a better dancer too, keep thinking about “it” and take Edie’s classes to see what “it” is all about!”

From Tracey…
“Hi Edie! I was in Denver at the Salsa Congress this year. It had been 8 years since I had danced a step. I had also waited 10 years to take from you! You didn’t disappoint! The best thing was the psychology part. You reminded me that it was ok to be a lady and be feminine. I had really struggled with it. You also had the women and men say certain things to each other in class. We looked at each other and you had us tell them we trusted and respected them and we would follow wherever they took us. And then you had the men tell us we were safe and secure and that basically they wouldn’t let us down. I can’t remember it word for word.

I did tell that to my husband when I got home and our marriage has improved!I have a blog and tomorrow my post is on femininity and how you taught me that it was OK to embrace it. I was hoping you would share with me again what we said. I at least want to do you the honor of getting it right. The post is even named after you. I’m not trying to steal material, it’s just a post about being ok with your femininity. I live in the Bible Belt and were told from day one basically to cover it. I’m not talking about the way we dress. I’m talking about just being, because they’re afraid we’ll cross a boundary. I would really appreciate it. If not, no worries. I’ll do the best I can to do it and you justice!

Edie, please keep going! You’re amazing and we need more women like this. Our parents never knew how to teach us how to handle our emotions and it wreaked havoc on the last 2-3 generations. I’ve had to try and figure it out and find people like you as mentors that help us learn. It’s so important!

Thank you for all you give! You’re loved by many!

Another Testimonial from a dancer in Singapore:
http://theperfectwives.wordpress.com…s-about-women/